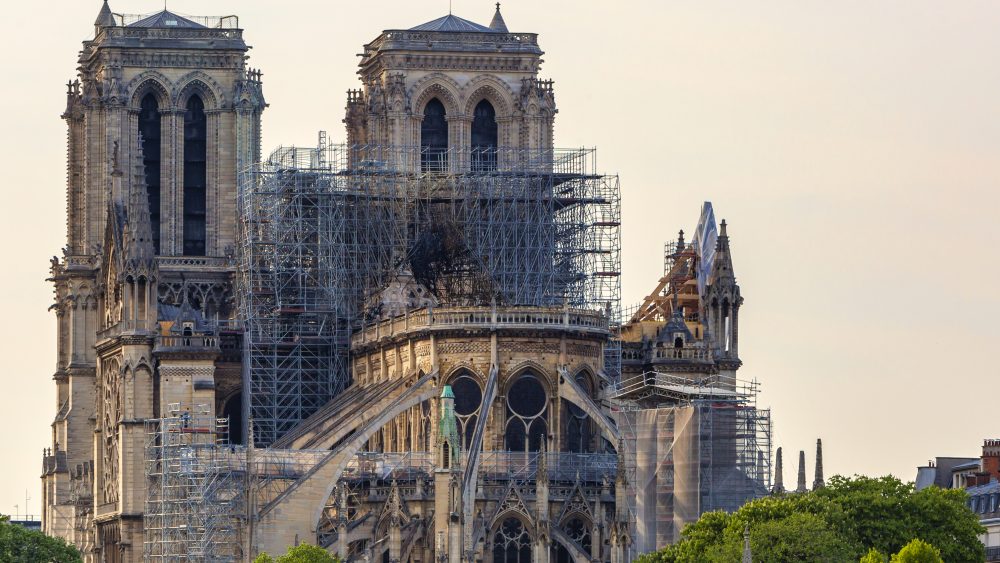 The recent fire that nearly destroyed the 800-year-old Notre Dame Cathedral devastated Paris and the world.  Although the exact cause is still under investigation, there is evidence that it was started by an electrical short that occurred during a large-scale renovation. While is one of the risks inherent in restoring older structures, there are also other risks and rewards to consider. The decision to renovate or to raze and rebuild depends on budget, time availability, and commitment to maintaining older infrastructure.

The Rewards of Restoration Can be Great

Of course, the idea of restoring an old building to its former glory is a popular one. For one thing, the beauty and craftsmanship of older structures make them very appealing. The National Trust for Preservation wrote a few years ago about reasons to save older buildings, including their historic value, their architectural significance, as well as their interest to tourists and potential tenants. Often, the materials that were used in the original construction are high quality and made to last.  In addition, the history behind the building can have cultural significance for the local community. The final reason is that once a historic building is gone, it cannot be replaced. It may hold some hidden treasures or architectural features that will be lost forever.

JOA has been part of the seismic retrofit of Providence Little Company of St Mary Hospital in San Pedro, CA.  (It joined the group of Providence hospitals in the early 1990s.) Built in 1925, this historic hospital is being upgraded to bring the original structure up to current earthquake standards.

Of the several techniques for restoration, each has pros and cons depending on the future intended use of the building. For example, an older structure that will be used as an office will need additional features to accommodate a modern workforce, including computers, internet, air conditioning, disaster-safety plans, and provisions for disabled employees.

The Risks can be Expensive

A construction site fire can happen at any time. Flammable materials such as wood, solvents, and gasoline—when paired with potential sparks from a sander, welder, , electrical wire or temporary lighting—can create a dangerous environment.

A recent article in Fast Company discusses some of the fires in historical structures around the world that have occurred over the last decade. The main causes include lack of oversight, extensive use of wood and other flammable materials, and lack of fire standards.

“Buildings under construction or renovation are at their most vulnerable and weakest condition,” wrote the U.S. Fire Administration, part of FEMA, in a recently published bulletin.

According to Fast Company, older structures often contain extremely dry wood that makes them potential tinderboxes (e.g. the roof of Notre Dame is called “the forest” because of the many massive timbers used to build it centuries ago).

Fire standards have become much stricter in the United States, but there are no universal standards for fire prevention systems worldwide.

The above three are fairly well-known hazards associated with older renovations. Chipping paint, asbestos in walls, and hidden mold that has dried out can all lurk below the surface and harm workers and occupants. Experienced contractors will be able to study and anticipate the mitigation steps required and plan accordingly to keep workers and others safe during construction.

For example, for lead paint removal, certification by the Environmental Protection Agency (EPA) is typically required, as is proper disposal of lead-based paint residue and debris. For asbestos and mold, other precautions need to be taken since they are the most dangerous and toxic when airborne. Insulation and pipe coverings are some of the most hazardous sources of asbestos. It’s also important that contractors have a dust control plan. While dust is a natural part of the renovation process, capturing and minimizing it as much as possible will help protect workers.

Although not always dangerous, other costs and delays can occur due to the needs and regulations required to make buildings safe and livable.

Some hidden costs start with the need to upgrade electrical grids and computer networks. While older electrical systems may still work, they might not have grounding, insulation or outlets, or be robust enough to support modern needs. Often, electrical/mechanical rooms are lacking sufficient space and infrastructure for technology distribution. It can also be the case that the power and technology grids outside the building are not capable of supporting the new requirements of a major renovation.

Up-to-date buildings typically require some sort of air conditioning in order to keep electrical and server rooms cool and safe. California’s Title 24 has very strict standards when it comes to air-conditioning and lighting. Title 24’s success in dropping energy usage in California has led to the national model called ASHRAE 90.1-2013. Though the national program falls behind in meeting its goals, there is still momentum towards stringent guidelines in saving energy which will have a profound impact on restoring/retrofitting historical structures.

Older buildings simply weren’t designed to hold the infrastructure required for air conditioning, which can require DX or water systems, variable frequency drives, and more power and space than is available. Sometimes the roof can’t support the weight of air conditioning units, and other provisions need to be taken instead.

Other things to consider are the requirements of the American Disabilities Act. Older buildings may not have the space to add ramps next to the stairs. Doors and lifts may be too narrow for wheelchairs. Chairlifts may need to be placed outside in order to accommodate disabled persons.

To Retrofit or not to Retrofit?

Ultimately, the decision whether or not to retrofit a building can be a complex one. Sometimes the cost-benefit analysis does not weigh in favor of keeping older buildings. This is can be a big loss for the community for both conservation and historical reasons. Older buildings can have an intrinsic value that is not quantifiable. But if the risks outweigh the rewards, then companies and municipalities may choose to tear down and rebuild rather than save an older building.

Whatever the decision, it should be well-thought-out and planned to avoid extra costs, risks, and delays.