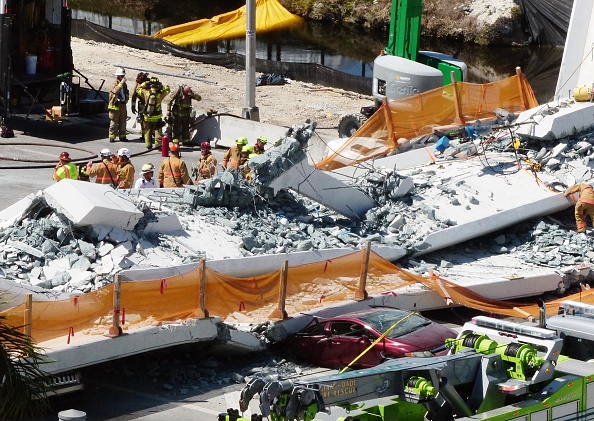 SIX DAYS TO DISASTER: THE BRIDGE COLLAPSE AT FIU—PART 2

A Story of Mistakes, Oversights and Missed Opportunities

On March 15, 2018, at 1:45 PM, a pedestrian bridge under construction at Florida International University (FIU) in Miami collapsed onto the cars below, killing six people and leaving one person permanently disabled.

In Part 1 of this blog series—The Events— we reviewed the days leading up to the collapse. For a recap, See Part 1.

This week, in Part 2, we will explore the underlying circumstances that may have contributed to this catastrophic event. These included the decisions made and the lack of open communication between the companies/agencies involved.

In the six days between moving the bridge over the street and its collapse on the 15th, the agencies were talking frequently and emailing pictures of the cracks. Despite the fact that everyone knew the cracks were growing daily, the decisions made did not prevent this disaster. At least six mistakes occurred during this period. Below we will look at these six failures.

MCM hired FIGG Bridge Engineers (FIGG) of Tallahassee as a sub-contractor and Engineer of Record (EOR) and Structural Technologies (VSL) to perform post-tensioning on the project.

During the time the cracks were developing, FIGG appeared to show no sense of urgency. For example, when FIGG received emails with pictures of the growing cracks late on Monday, March 12, no one mobilized from Tallahassee to Miami to see the cracks firsthand until Thursday. Instead, they remained at their office and analyzed the pictures remotely, recommending shims and re-tensioning without anyone actually visually inspecting the bridge. They didn’t look at the cracks in person until March 15, three (3) days later, when their directives were already in place.

FIGG engineers relied on computer modeling to investigate the failure but were unable to replicate the cracks on their software. FIGG’s management team was aware that they could not figure out why the cracks were occurring.

Why did FIGG not take the time to have a structural group examine the cracks before recommending remedial measures? Experienced structural engineers at FIGG would most likely have come to the conclusion that the cracking bridge was a potential danger to the public, e.g. pieces of the bridge could have broken off and fallen into the roadway.

Mistake No. 2 – A Lack of Questioning and Understanding

From the very first crack reported in February, FIGG told the team that they posed no safety issues. As the Engineer of Record, all other companies took FIGG’s comments at face value. But did all the others really understand what “no safety issues” meant? As time went on, MCM, VSL, and BPA all expressed concern about the cracks, particularly as they grew larger. Yet they did not question FIGG’s analysis or assurances of “no safety issues.”

MCM, BPA and VSL never called an audible to say, “Something’s wrong here. This bridge is unsafe, and we need to protect the public.”

The extended team might have been experiencing a well-studied psychological phenomenon called “Groupthink.”

According to Psychology Today, “Groupthink occurs when a group of well-intentioned people makes irrational or non-optimal decisions spurred by the urge to conform or the discouragement of dissent. Group members may refrain from expressing doubts and judgments or disagreeing with the consensus. In the interest of making a decision that furthers their group cause, members may ignore any ethical or moral consequences.”

Whatever the reasons, all of the employees of the other companies chose to go along with FIGG’s analysis, even though they had concerns about the increasing crack size.

Mistake No. 3 – Not Recognizing the Surrounding Conditions

FIGG may have believed the cracks did not pose a safety risk. Even so, the surrounding circumstances dictated an abundance of caution to which FIGG should have responded. The fact was that a 900-ton concrete bridge above an active intersection began to crack as soon as the support framework was removed. In addition to the lack of responsiveness by FIGG, there was no safety net nor other formwork to support or hold the bridge in place. On March 13, a shim was placed under the bridge, but it only supported a portion of the weight.

In addition, the street below was very busy with an average of 66,000 cars a day on it. It appears no one even considered closing the street while they analyzed and addressed the structural issues. When the public is involved, heightened concern and awareness are warranted.

Mistake No. 4 – A Lack of Oversight

Both MCM and BPA failed in their oversight of FIGG. Although MCM and BPA repeatedly informed FIGG about the widening cracks, their management seemed to stop there. In particular, the watchdog group BPA did not exercise their authority to slow things down or alter course.

It is unclear why everyone on the team allowed FIGG to make the final call on the cracks. FIGG designed the bridge, and so a deeper peer review seemed warranted, especially since FIGG continued to say that everything was fine.

Both before and after the March 15th meeting, BPA as a Construction Engineering and Inspection (CEI) contractor could have applied its own independent judgment (regardless of the opinion expressed by FIGG) by immediately asking FIU and MCM to postpone the re-stressing of the bridge.

FIGG told the others that they did not know why the cracks were occurring. With that level of uncertainty, BPA could also have recommended the closure of SW 8th street until FIGG put together additional remedial measures.

Mistake No. 5 – Doing the Work During the Day

A particularly significant error was choosing to re-tension the bridge during the middle of the day when traffic was at its busiest.

On Saturday the 10thwhen the bridge was moved, the road was closed. By daybreak on Monday, the road had reopened and remained so until Thursday’s tragedy.

The extended team did not choose to close the road during the re-tensioning. And if no road closure, then at a minimum, they should have completed the work at night.

Mistake No. 6 – Unwillingness to Make the Tough Decision

All of the failures above point to a final one. Even in the face of everything—the growing cracks with no explanation, the heavily-trafficked street, the lack of a back-up plan—no one was willing to make the tough decision.

That tough decision would probably have looked something like this:

Potential reasons no one was willing to make the call include increased costs, complaints from the public, an angry client, etc. There was also the risk of additional change orders and other costly delays.

It is very difficult to make the complicated call in a “what if” scenario when the outcome is uncertain. It is only in 20/20 hindsight we can look back and see what was going to happen. In retrospect, we can also see that the variety of issues listed above all contributed to the bridge collapse. If the teams had felt less pressure to complete the project, communicated better and spoken up with their concerns more directly, perhaps the bridge would not have collapsed.

In the final post, Part 3—The Lessons—we will consider the take-aways (even the painful ones) that we all must consider when managing a large construction project.

[1]The many of the details of the bridge collapse included here are summarized from the OSHA report, Investigation of March 15, 2018, Pedestrian Bridge Collapse at Florida International University, Miami, FL, U.S Department of Labor Occupational Safety and Health Administration Directorate of Construction, July 2019.