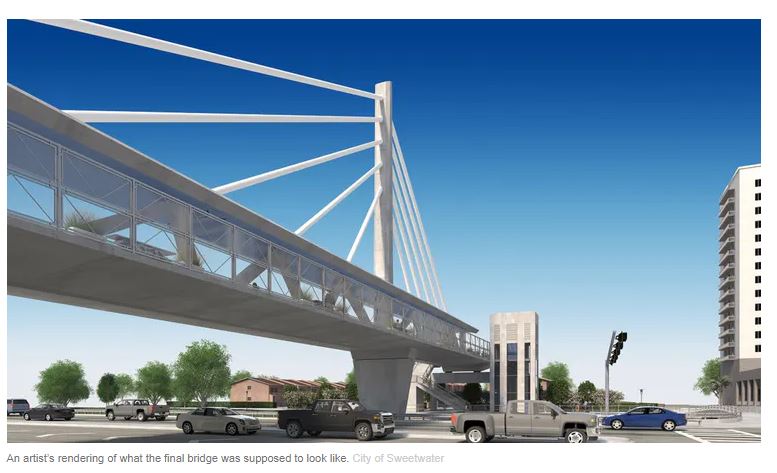 A Story of Innovation, Failure and Hope

On March 15, 2018, at 1:45 PM, a pedestrian bridge under construction at Florida International University (FIU) in Miami collapsed onto the cars below it at a traffic light. Six people were killed, and one person was permanently disabled.

The bridge—a single concrete span that weighed 930 tons—had been placed over the roadway less than a week before. In the days leading up to the collapse, large cracks had developed in the bridge’s concrete. The key project participants were aware of the cracks and were communicating frequently about whether they posed a danger to public safety. Despite the misgivings of many, it was determined that the cracks were not dangerous, a disastrous conclusion given the final outcome.

With any construction problem that results in injuries or deaths, it is important to review what could have been done differently to prevent it. This blog post presents the first of a three-part series that will look at the FIU bridge collapse from various perspectives.

In 2013, Florida International University received $19M in funds to build a pedestrian bridge over SW 8th Street. The bridge would allow students to walk over a canal and eight lanes of traffic from the City of Sweetwater to the school campus.

FIU chose Munilla Construction Management, Inc. (MCM) to build the bridge and Bolton Perez and Associates, Inc. (BPA) of Miami to do the Construction Engineering and Inspection work.

MCM hired FIGG Bridge Engineers (FIGG) of Tallahassee as a sub-contractor and Engineer of Record (EOR) and Structural Technologies (VSL) to perform post-tensioning on the project.

Design and Construction of the Bridge

FIGG designed the bridge to look like a cable-stayed bridge, although structurally it was not. It had two spans that would eventually be connected, one over the roadway, and one over the canal next to it. The illustration below shows the bridge in its current state at the time of the collapse.

FIGG and MCM began work in 2017. The companies used an Accelerated Bridge Construction (ABC) technique to limit road closures, and the casting of the main bridge was done in a yard next to SW 8th Street. Formwork was put up to support the bridge, and from October-December 2017, the concrete was poured at various intervals.

In early 2018, the bridge was post-tensioned by VSL. (Post-tensioning means that the reinforced concrete is strengthened by applying tension/stress to the steel rods inside. These rods may be repeatedly stressed and de-stressed during construction to test the strength of the structure.)

On the day the formwork was removed and the bridge was self-standing for the first time, employees from MCM and other firms heard a loud popping noise. They walked over the bridge and took photos of cracks that had developed, especially at the base of diagonal 11. FIGG responded to the photos with comments like “no structural concern” and “cracks expected.”

A few days later, the bridge was moved over the street, and a fateful set of events was set into motion.

On the morning of Saturday, March 10, SW 8th Street was closed, and the bridge was relocated to its permanent location over the road. Employees from the different companies were there, including six FIGG engineers from Tallahassee. At that time, the north end of the bridge was generally without cracks except for the ones mentioned above.

Soon after the bridge was placed over the road, MCM, BPA and FIGG employees walked over it to look for anything unusual. FIGG reported no significant issues, though a March 12 email from MCM contradicted this, saying that MCM and BPA had noticed cracks.

After the move, VSL de-stressed the steel in several diagonals, a normal part of the construction process at this point. As they worked on diagonal 11, more cracks began to appear, especially in the lower and upper parts. Three VSL employees observed the cracks and sent pictures, saying that “it cracked like hell.”

On March 12, MCM employees took more pictures of the cracks which appeared to have grown in size. They sent these pictures to FIGG in an email stating, “Your immediate attention and response is required.”

FIGG opened the email from MCM on Tuesday morning. After reviewing the photos, FIGG asked MCM to place an additional plastic shim directly under the span.

FIGG replied that “We have evaluated this further and confirmed that this is not a safety issue.” FIGG also told MCM to re-tension the two steel bars inside diagonal 11 as soon as possible, but to keep a close eye in case the crack size increased.

This re-tensioning was not part of the original plan. FIGG hoped that doing so would either stop further growth of the cracks or shrink the crack sizes. Since the VSL team had moved out of town, the re-tensioning was scheduled for Thursday, March 15.

MCM sent additional pictures of the expanding cracks to FIGG and confirmed an early meeting for March 15.

FIGG spent the 14th at its office analyzing the pictures and prepping for the presentation the following day.

MCM placed the recommended shim under the span. They also told VSL to prepare to re-tension the steel bars in diagonal 11 and arranged a crane to be there to help.

VSL asked MCM if the cracks would be fixed before they performed the job. MCM said no—FIGG had assured them that the cracks did not present any safety issues.

Early in the morning on March 15, two FIGG structural engineers arrived from Tallahassee and examined the cracks, first walking over the deck and then using a man-lift. Also present were employees of MCM and BPA who later reported that the cracks looked worse than in the pictures.

After, employees of all the companies met in MCM’s trailer. FIGG again stated that the cracks did not present any safety concerns. They thought that the cracks were caused by a temporary condition and that after the other span was constructed, the pressure on the main span would be reduced.

FIGG suggested some remedial measures. However they did not recommend bracing the bridge, nor did they suggest closing SW 8th Street in the meantime. FIGG’s findings were not peer-reviewed and neither was their recommendation to re-tension the steel bars.

At noon, VSL gathered its crew on the bridge to begin re-tensioning the steel bars in diagonal 11. As instructed, they alternated between the upper and lower bars, adding a little bit of pressure each time until the correct tension was reached. They had just finished re-tensioning the upper bar and were at the lower bar when the bridge collapse occurred.

The concrete at the junction of diagonal 11 and column 12 collapsed, creating a hole. Column 12 then lost support and failed. The top tilted 80 degrees south and the base of column 12 shifted a few feet north but remained on the top of the pylon. The collapse of the canopy, diagonal 11 and the deck followed.

The falling bridge crushed five motorists in the cars that were stopped at the traffic light. One VSL employee also died, and another was critically injured.

The collapse received a great deal of national media attention in the subsequent days and months. In addition, OSHA investigated and produced a comprehensive report.

In the next post, Part 2—The Participants, we will examine some of the circumstances and decisions surrounding this disaster, particularly the decision-making about whether the bridge was safe after the cracks appeared.